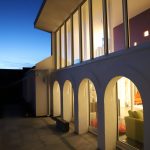 This project is a refurbishment, reconfiguration and extension to a bungalow in a dubious Spanish villa style called ‘Los Arcos’ (The Arches). The home was originally built in 1974 as a holiday home for John Player (Cigarettes) . The site faces the sea, Bideford Bay to the north, the street to the south and sits on a windy ridge above Westward Ho! in North Devon.

The extension infilled a previous semi- open air courtyard porch set behind arches which were retained.

The remodeling works reconfigured the entrance arrival to position it onto a dramatic axis through the house with a fantastic view of the sea behind.

An additional bedroom, 2x bathrooms, WC and home office were added by better re-arrangement of the 1st floor and converting the garage into an inhabited and well serviced space.

The completed project is a passive solar design exemplar; transforming a cold existing home into a warm, but not too hot, contemporary dwelling. The EPC of the project went from a low D to a high B which is very good when working with an existing 1970’s building. We added a two storey glazed facade just behind the main existing arches facing south.  We modified an existing block cavity wall, filling its core in order to form a hybrid type of Trombe Wall. In essence this is a thermal mass wall which has a dark red heat absorbing lime rendered finish and it received low sun in the cooler months which warms up and re-radiates heat in the night and cloudy times whilst stabilizing internal temperature ranges in the Summer months. To prevent overheating there is a flat roof cantilever which prevents any sun from reaching the interior between early May and early August.The new floor too is a thermal mass element; a dark tiled finish absorbs solar radiation and retains is temperature as it is on a thick screed with wet underfloor heating laid on floor insulation.

Only areas of the house which were under performing architecturally were remodeled; 3x bedrooms and 3x bathrooms and the kitchen were left untouched and allowed the house to be lived in during most of the building project apart for 3 months in mid-winter. This saved on duplicated living costs and energy use.